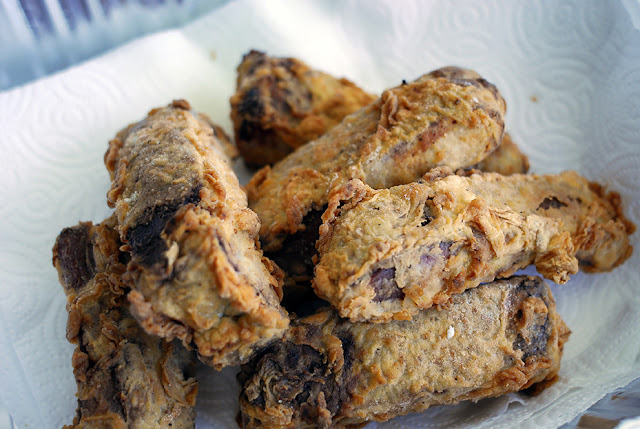 Yeah, you heard me right.  I said Deep Fried Ribs…  Sounds like a heart attack on a stick, doesn’t it?  Well earlier this week a long-time customer of ours, Tom Pavlak of Centralia, MO, told me about a batch he had recently made and I just had to try them for myself.  I mean, what could be better than a pork spare rib deep fried to a crispy brown?  Not much, I’ll tell ‘ya, not much.

The premise is fairly simple, you smoke a rack of pork spare ribs for a little bit, then you batter and deep fry them in hot oil.  But, in practice it’s a little harder to get right than you’d think.  Basically, you’ve got to try to harmonize two disjointed cooking processes to arrive at a perfectly cooked rib; not underdone and not overdone.  The secret would lie in the amount of time they would need to par-cook in the smoke first so they were near-done, but still needed a little more cooking time until they were tender.  I figured if I could find this perfect balance it would help reduce the time need to fry them, thus helping to prevent overcooking.

First, I trimmed up my pork spare ribs into what is known as a “St. Louis” style cut.  Basically, the racks are squared up into a nice neat rectangle shape, the membrane is removed from the back side and the inside skirt is also trimmed off.  Then, each side was treated with a light coating of prepared yellow mustard and some Oakridge BBQ Secret Weapon bbq rub.

Next, I heated up my smoker to 225º using Royal Oak lump charcoal and some oak and hickory chunks for flavor.  The ribs were placed on the smoker and cooked for 4 hours.  Usually, spare ribs take close to six, sometimes six and a half hours until they’re done.  However, since I knew we’d be deep frying these later, I figured 4 hours in the smoke would be just about right.

After 4 hours, they looked like above and I pulled them from the cooker.  I placed the rack on a sheet pan and tented it with aluminum foil.  I allowed it to cool sufficiently then placed the slab into the refrigerator to fully chill it down.

Once chilled, I separated the slab into single-bone servings with a sharp knife and built a simple milk/egg wash and some seasoned flour.  Meanwhile, I began heating my deep fryer filled with canola oil to 375º.

I placed each battered rib into the bottom of my fry basket such that they did not touch one another and fried them in multiple batches to prevent them from sticking together.  Once out of the fryer, drain on several layers of paper towel and dust liberally with Oakridge BBQ Secret Weapon rub.

Since I already had the grease hot, I also made some steak fries and seasoned them with Oakridge BBQ Game Bird & Chicken rub.  Together with some cottage cheese and some ripe red tomatoes, it made a wonderful meal.

The interplay between the succulent savory/smoky interior with the crispy crunchy exterior was literally mind-blowing.  They were WONDERFUL!   My oldest daughter, who has always loved my regular smoked spare ribs (to the degree of never eating anyone else’s ribs, regardless of who made them) asked if I would always make them this way from now on…

Not sure if I’ll go quite that far (cause these were a lot of work), but you can guarantee we’ll be making these again!