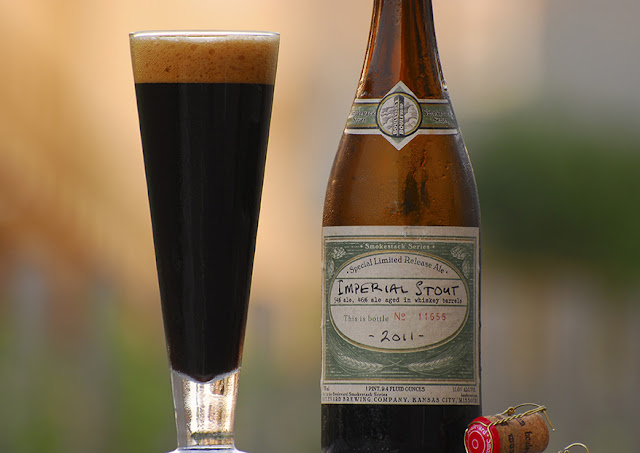 I’ve been a long-time customer/supporter/fan-boy of Kansas City’s own Boulevard Brewery.  However, this is the first time I’ve ever felt compelled to publish a review of one of their beers.  Sure, I’ve loved their Bully Porter for years and their newer Lunar Ale has been a favorite since my father-in-law brought some home for me before it was even on store shelves (he used to work on their boiler all the time and they’d send him home with a couple cases of beer!).  As a matter of fact, Boulevard hasn’t produced a beer yet that I haven’t at least liked a little (most I like a lot).  But, this was the first time I’ve felt deeply moved from one of their beers.  You know, the kind of experience that sticks with you for days, or weeks, after the encounter?

Ask anybody that knows me and they’ll tell you I’m a huge fan of really dark beers, you know, the kind you can’t see through…  Somewhat of a weakness, I suppose.  Sort of a neurotic deficiency that can only be satisfied by quaffing the darkest, richest beers I can find.  Enter in:  Boulevard Imperial Stout.

Part of their Smokestack Series of special limited release ales, my Imperial Stout bottle was numbered 11655 out of what is believed to be a total production of only 11960 bottles.  So far, Boulevard has made two batches of this beer and my bottle belongs to batch #2.  It was reported by Boulevard earlier this year that batch #2 was found to be infected with a wild strain of yeast called Brettanomyces.  Often undesirable in most varieties of wine and beer, a Brett infection in a big bold beer like an Imperial Stout is not considered a bad thing.  In fact, most beer aficionados welcome this strain of wild yeast in certain beer styles like Belgian lambics, trappists, saisons, and even some stouts.  So, how will this impact my perception of this specialty beer from Boulevard?  On to my review…

Final Thoughts:
This is a BIG beer.  I mean pull your house off the foundation and drag it around the block, big…  The depth of flavors are astounding, a true sensory experience.  Not overly bitter, but appropriate for the style.  With 46% of this beer being aged in used whiskey barrels, the smokey/whiskey notes do predominate the flavor palette.  It reminds me a great deal of a barley wine, but with much more bravado and character.  Sort of like if a barley wine were a short, pasty-white European, this Imperial Stout would be his six-foot tall, bronze, well-muscled Latin alter-ego.

I suppose my only nit would be I wish it wasn’t quite so sweet.  It’s hard to say for sure, but I bet I’d have liked it even more if it had been allowed it finish a bit dryer, but that probably would have also raised the alcohol content well into the stratosphere and ruined the beer.

Drink well chilled as an after-dinner libation.  I could not imagine any meal that would stand up to the power and depth of flavors found in this Imperial Stout, so enjoy it by itself on your back deck with good company as the sun goes down.